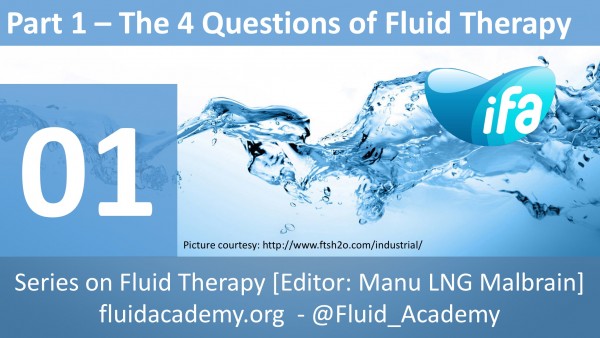 Part 1.3. of series on fluid therapy

Why should I bother about the ebb and flow phase of shock? An illustrative case report

At this stage, the participants of the ISICEM and IFAD meetings were asked the second multiple choice question (MCQ2): “Taking into account the results obtained with the transpulmonary thermodilution, what is your treatment of choice at this stage?” Possible answers were: 1) norepinephrine; 2) dobutamine; 3) fluid bolus; 4) diuretics or 5) other. Figure 5 shows the results of three votings. 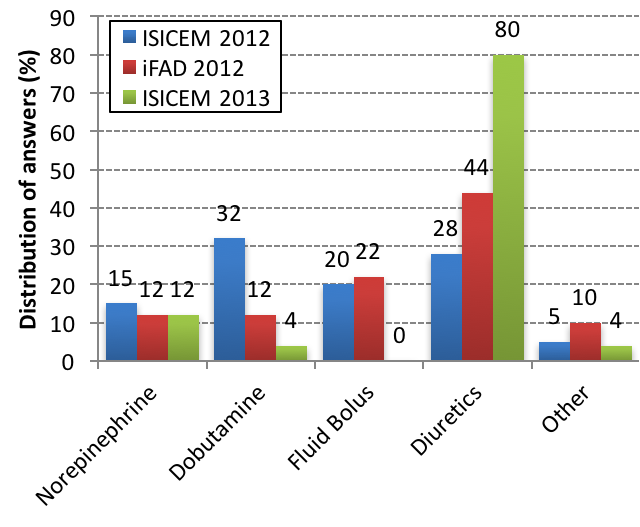 Again, physicians were reluctant to fill the patient initially (with only 0 to 22% indicating to give a fluid bolus). This patient had a relatively normal preload according to the volumetric preload indicator as was obtained by PiCCO (GEDVI 757 ml/m2) but a high preload according to the barometric preload indicator (CVP 16 mmHg). Measurement of bladder pressure showed a slightly increased IAP of 12 mmHg [17]. The Surviving Sepsis Campaign Guidelines (SSCG) originally recommended that patients should be resuscitated towards a CVP range of 8-12 mmHg [18]. The previous revision of the SSCG still advocates initial fluid management based on CVP measurements [19]. However, using pressures to measure preload has been found to be inaccurate time and time again, particularly in patients ventilated with intermittent positive pressure ventilation (IPPV), (auto) PEEP, post cardiac surgery, obesity and those with intra-abdominal hypertension or abdominal compartment syndrome [5, 20]. Using a CVP threshold therefore may lead to over- but also under-resuscitation. Although it is re-assuring and noteworthy that the previous SSCG version does mention the effects of increased ITP and IAP on CVP:

“In mechanically ventilated patients or those with known preexisting decreased ventricular compliance, a higher target CVP of 12 to 15 mm Hg should be achieved to account for the impediment in filling. Similar consideration may be warranted in circumstances of increased abdominal pressure. Elevated CVP may also be seen with preexisting clinically significant pulmonary artery hypertension, making use of this variable untenable for judging intravascular volume status.”

Within this respect the compliance of the thorax and the abdomen are key elements in order to explain the index of transmission of a given pressure from one compartment to another [19]:

“The use of lung-protective strategies for patients with ARDS… has been widely accepted, but the precise choice of tidal volume… may require adjustment for such factors as the plateau pressure achieved, the level of positive end-expiratory pressure chosen, the compliance of the thoracoabdominal compartment, …”

This lead recently to the recognition of the polycompartment syndrome [21, 22]. The last version of the SSCG finally has left the CVP criterion and has introduced functional hemodynamics and passive leg raising test (PLR)[23, 24].

In this case study (dating before the publication of the big fluid trials) the patient was given small volume resuscitation with hyperhaes (Fresenius Kabi) at a dose of 4ml/kg given as a bolus over 10-15 minutes combined with 1000 ml of balanced colloids (Volulyte, 6% hydroxyethyl starch 130/0.4), following the results obtained with the transpulmonary thermodilution.

Editorial Comment: “We have to note that after the EMEA PRAC recommendations, nowadays the use of starches cannot be advocated in patients with sepsis, burns or kidney injury. Instead of hyperhaes, a hypertonic salt solution 6% can be used.”

The patient remained on a dobutamine infusion (9 ug/kg/min) and norepinephrine (0.4 ug/kg/min). The following day (day 2) his CI increased to 5.7 L/min.m2, GEDVI increased to 900  ml/m2 and EVLWI had decreased to 14 ml/kg PBW (Table 2). Despite the filling, his CVP decreased from 16 to 6 mmHg, illustrating the opposite changes between barometric and volumetric preload indices due to increased intrathoracic pressure.

This is an example of a therapeutic dilemma or conflict [25]. A therapeutic conflict is a situation where each of the possible therapeutic decisions carries some potential harm [26]. In high-risk patients, the decision about fluid administration should be done within the context of a therapeutic conflict. Therapeutic conflicts are the biggest challenge for protocolized cardiovascular management in anesthetized and critically ill patients. A therapeutic conflict is where our decisions can make the most difference. Although the patient had evidence of severe pulmonary edema (EVLWI 38 ml/kg PBW) the decision was made to give fluids because the PPV was high and the PLR test was positive. Also, the GEDVI was relatively low in relation to the GEF, despite the increased CVP and increased left ventricular end diastolic area (from the ultrasound) [6, 27]. Cardiac US further showed that his inferior vena cava collapsibility index (IVCCI) was almost 50% [28](Figure 6). 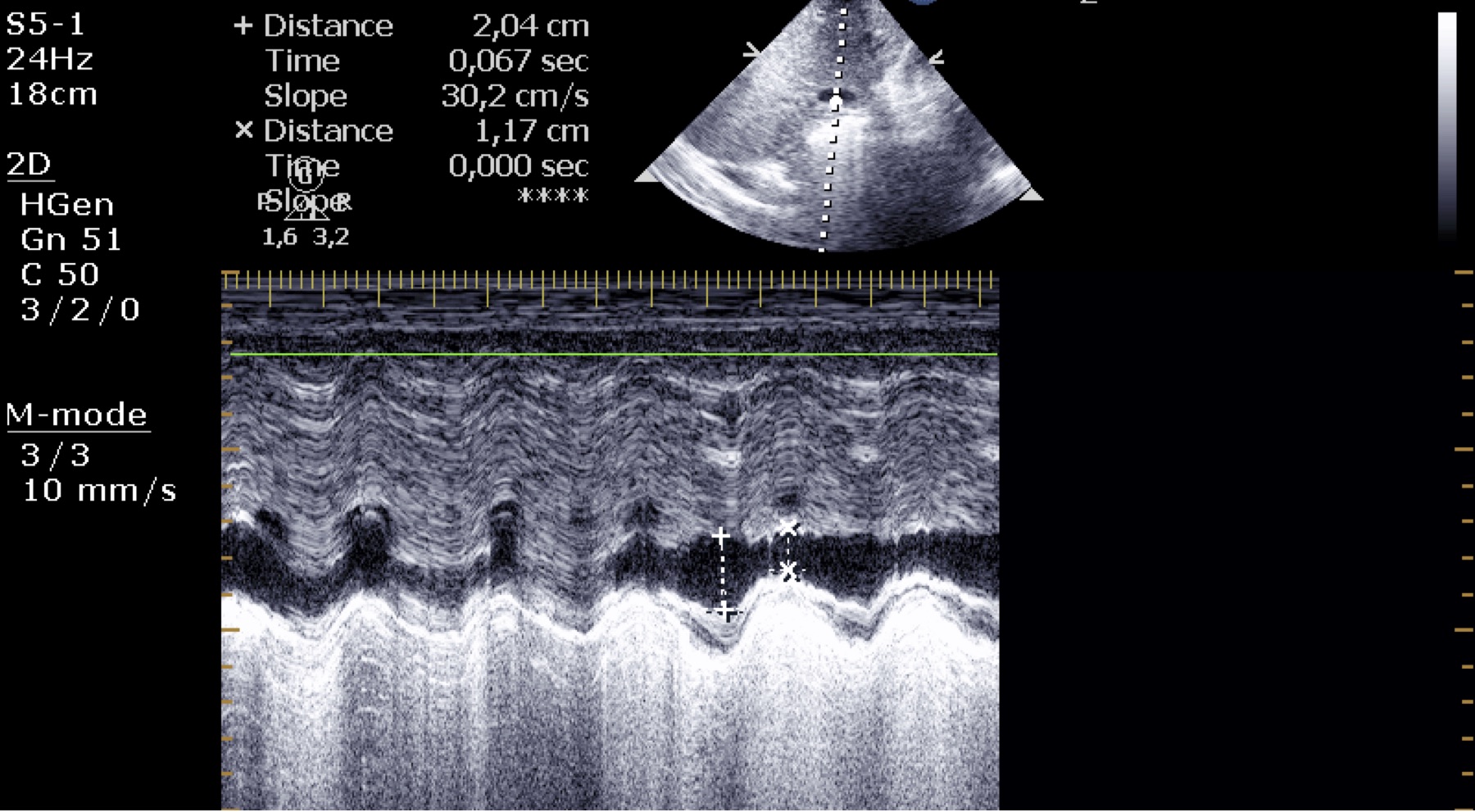 What was really important to know for this patient was the type of curve and where he was on his Frank Starling curve (Figure 7, panel A). 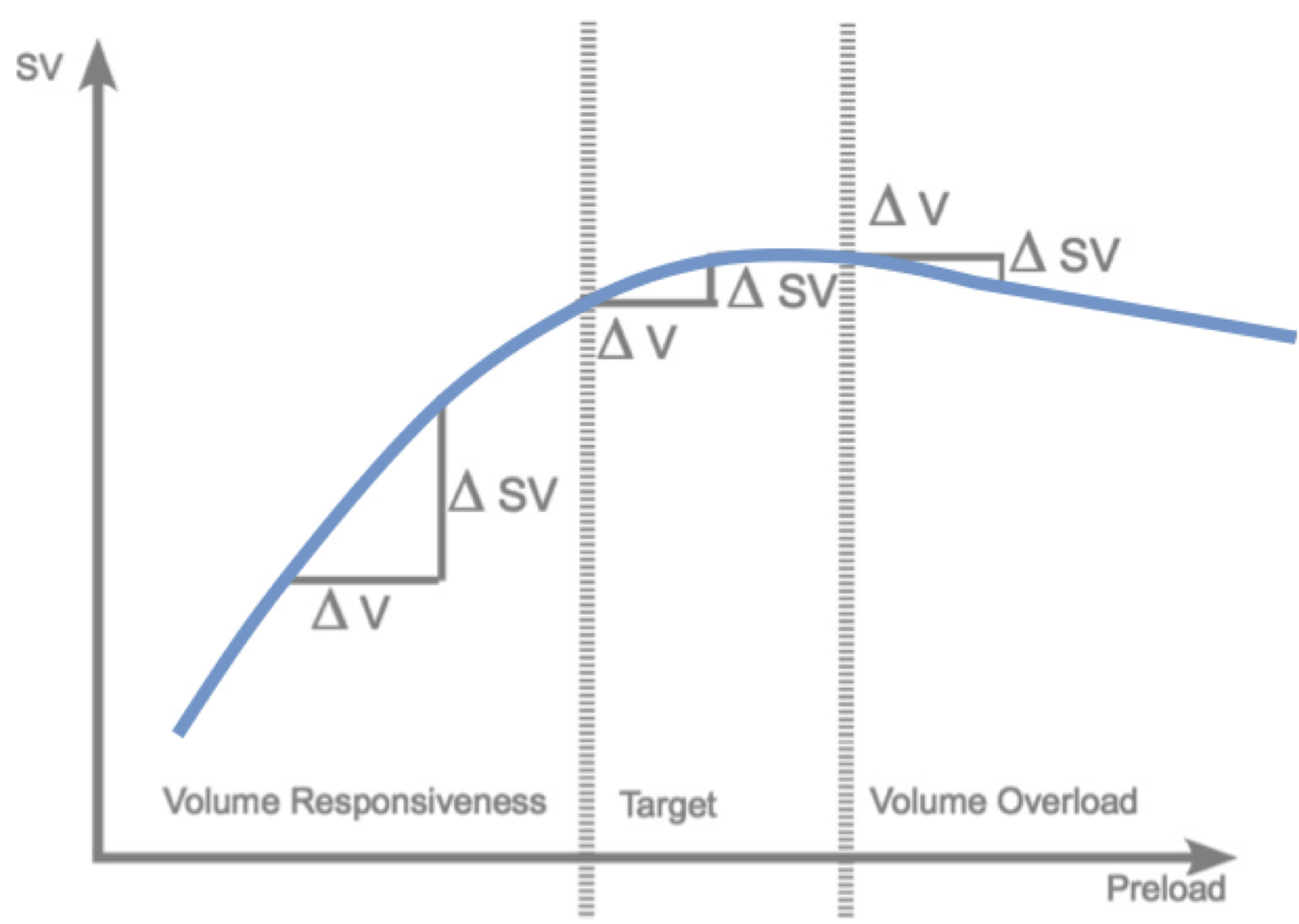 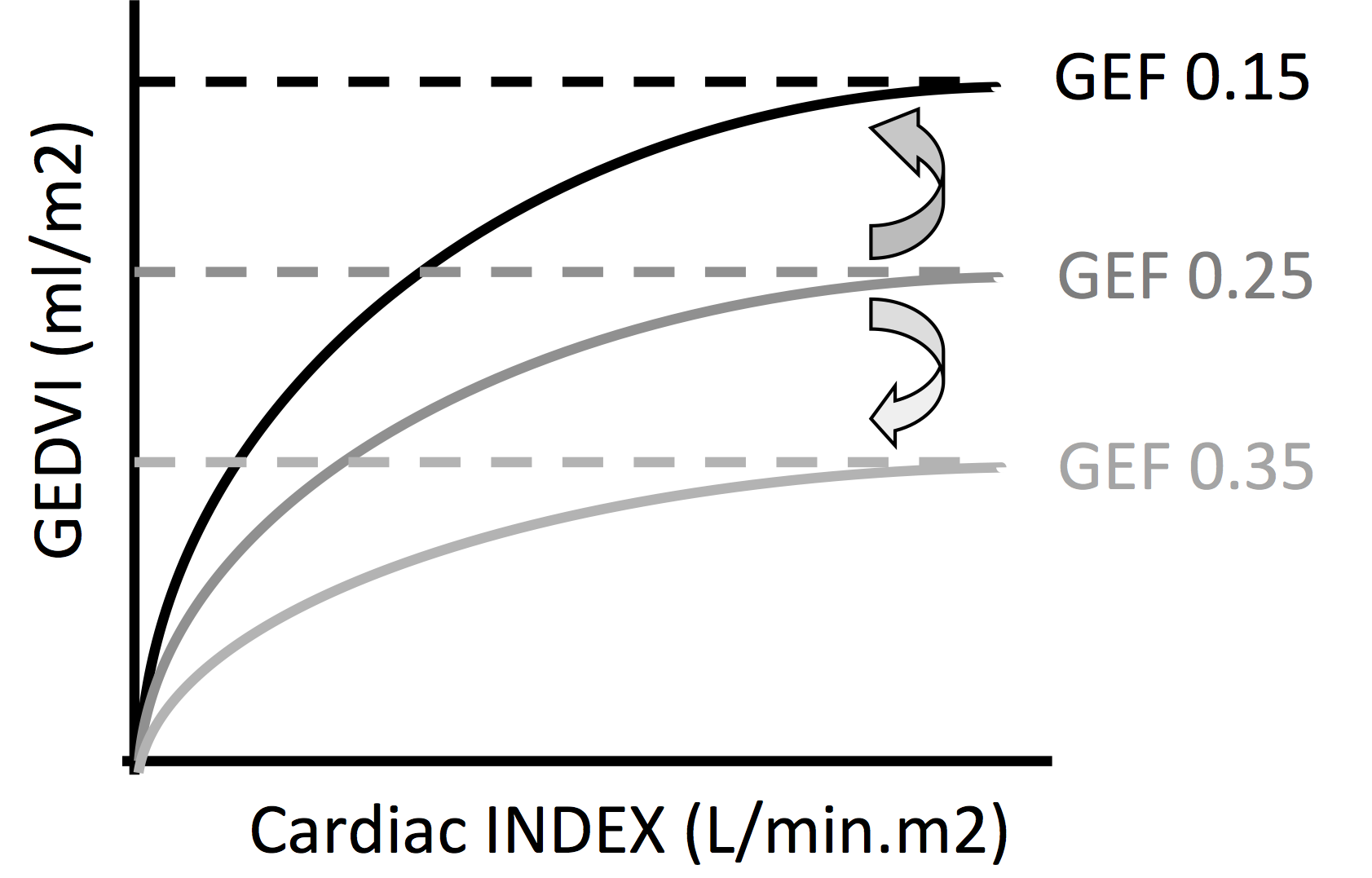 Observation of the transpulmonary thermodilution curve also allowed us to get further diagnostic clues (Figure 8 and Video 3). 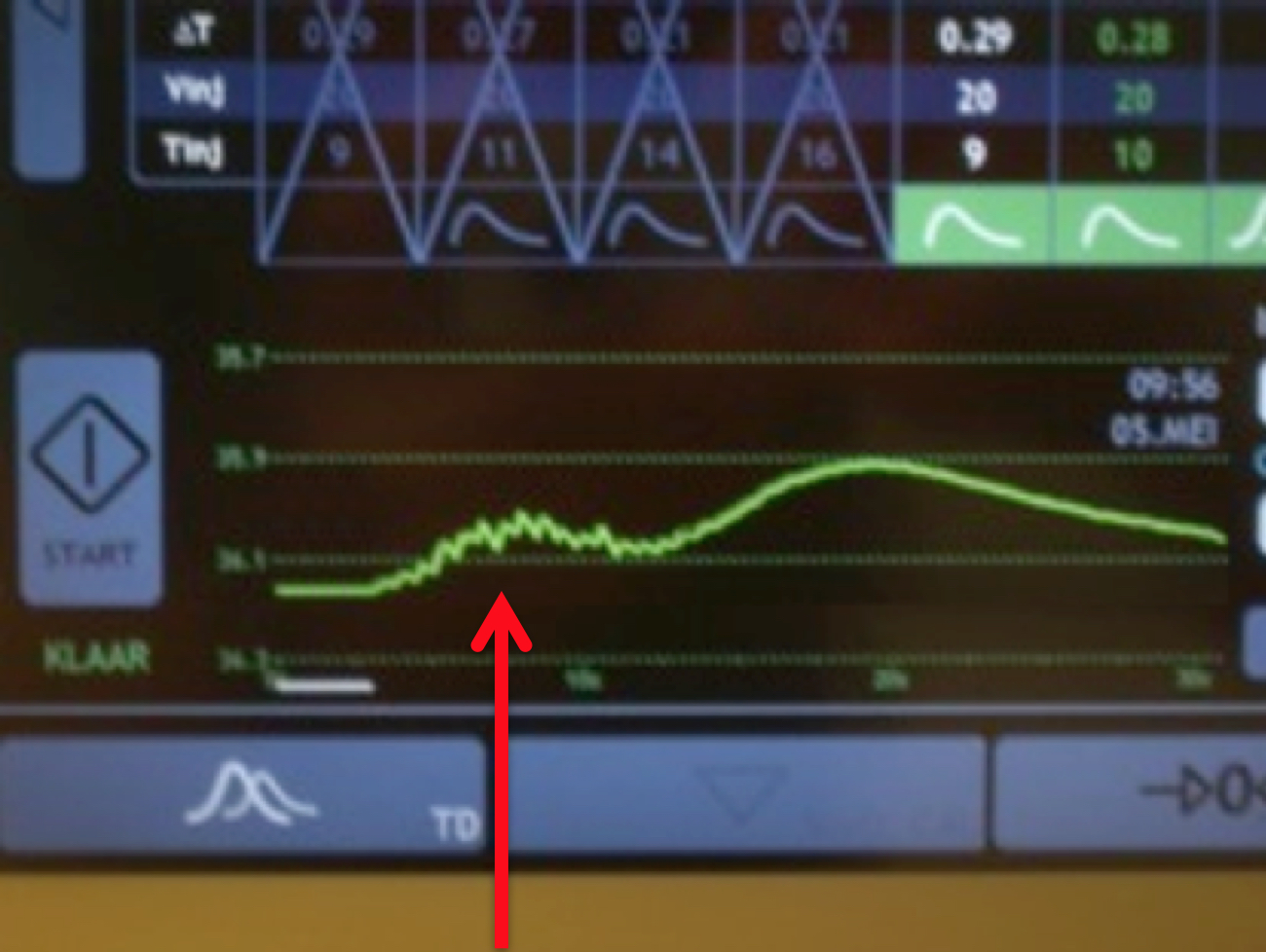 At this stage, the participants of the ISICEM and IFAD meetings were asked the third multiple choice question (MCQ3): “What is the premature hump that appeared on the transpulmonary thermodilution curve?”. Possible answers were:

1) Nothing to worry about, it is just an example of the crosstalk phenomenon
2) It is related to thermal bolus mixing
3) It may be an indicator of a right-to-left shunt due to pulmonary hypertension
4) It is related to a wrong or false measurement technique
5) I don't know