Part 1.4. of series on fluid therapy

Why should I bother about the ebb and flow phase of shock? An illustrative case report

At this stage, the participants of the ISICEM and IFAD meetings were asked the third multiple choice question (MCQ3): “What is the premature hump that appeared on the transpulmonary thermodilution curve?”. Possible answers were: 1) Nothing to worry about, it is just an example of the crosstalk phenomenon; 2) It is related to thermal bolus mixing; 3) It may be an indicator of a right-to-left shunt due to pulmonary hypertension; 4) It is related to a wrong or false measurement technique; or 5) I don't know. Figure 9 shows the results of three votings. 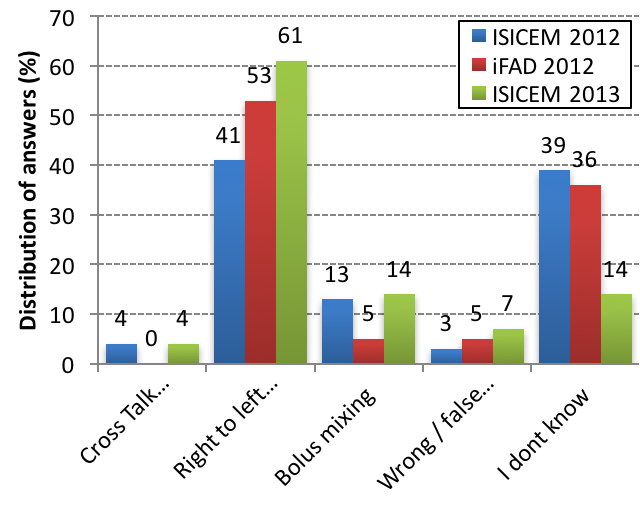 The premature hump is evidence for a right to left shunt where an opening (foramen ovale) appears between the right and left atria. About half of the participants (41 to 61%) indicated the correct answer. Because the patient was extremely hypovolemic, the combination of positive pressure ventilation with high PEEP led to increased pulmonary vascular resistances, pulmonary hypertension and a propagation of West zone 1 conditions to zones 2 and 3. This phenomenon has been documented before [29, 30].

By late afternoon of day 2, the patient had had a drop in urine output with production of only 350 mls over the last 12 hours despite a positive cumulative fluid balance of 4 litres. He was still on dobutamine 5 ug/kg/min, and norepinephrine 0.2 ug/kg/min. Other parameters are listed in Tables 2 and 3, and can be summarized as follows: CI 5.4 L/min.m2, MAP 79 mmHg, CVP 8 mmHg, PPV 6 %, GEF 23 %, GEDVI 1080 ml/m2, EVLWI 18 ml/kg PBW, conclusive with overfilling and worsening pulmonary edema in the absence of fluid responsiveness. Respiratory function deteriorated with a P/F ratio of 205, at an IPAP of 34 cmH2O, PEEP 11 cmH2O, while FiO2 was increased from 45 to 65%. Lactate levels increased from 1.6 to 2.6 mmol/L

At this stage, the participants of the ISICEM and IFAD meetings were asked the fourth multiple choice question (MCQ4): “Taking into account the new results obtained with the transpulmonary thermodilution and the drop in urine output, what is your treatment of choice at this stage?” Possible answers were:
1) norepinephrine
2) dobutamine
3) fluid bolus
4) diuretics
5) other